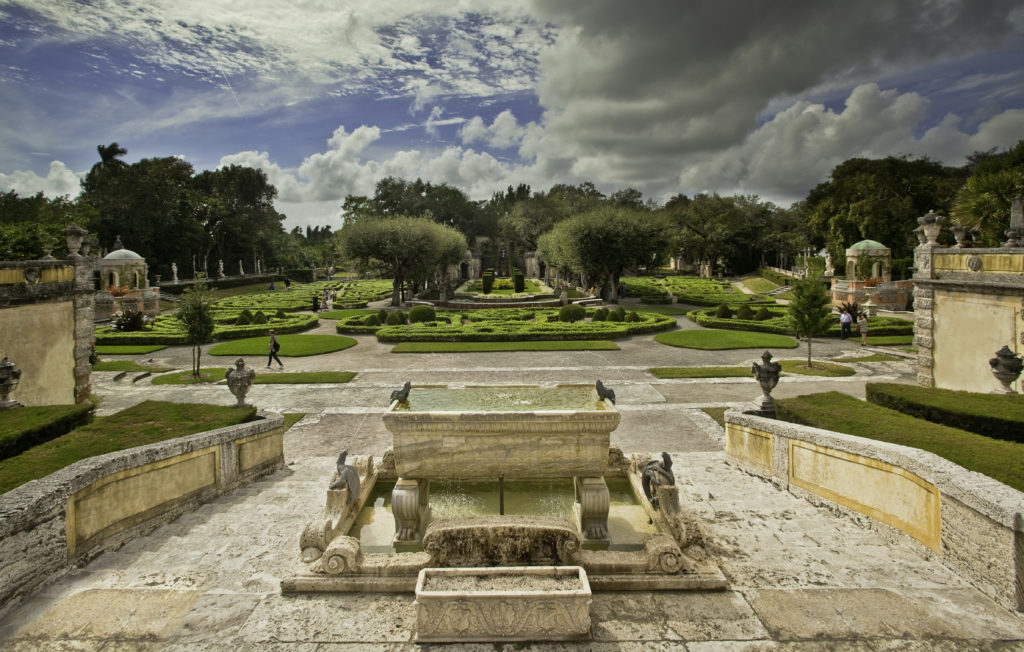 Built in the early nineteenth century, Vizcaya is one Miami’s original hotspots. The winter home of industrialist Charles Deering, this elaborate Renaissance-style estate and gardens is located in the Coconut Grove neighborhood, and remains one of the city’s most-visited and beloved attractions to this day.

A native of Maine, Deering’s father started the family business—agricultural and construction manufacturing—in the early 1870s, and by the end of the century, the Deerings were one of the wealthiest families in the United States. Charles, a perennial bachelor who never married, retired from his position as vice president of the company in 1910 due to failing health from pernicious anemia. A generous patron of the arts with homes in Paris, Evanston, Illinois and Chicago’s Lake Shore Drive, he promptly purchased land in Coconut Grove and started to build his newest dream home—Vizcaya.

A collaboration between Deering, renowned designer Paul Chalfin, architect F. Burrall Hoffman Jr., and Colombian landscape designer Diego Suarez, the plan for the elaborate estate and gardens soon began to take shape. In 1910, Chalfin and Deering took the first of many trips to Europe to gather ideas and hand-pick art, antiques, and furnishings for the Florida mansion. Construction on Villa Vizcaya began in 1914, and nine years later, this crown jewel of Miami architecture was complete.

Deering spent nine winters at the estate before his death aboard the SS City of Paris in 1925. Over the years, various parts of the estate were parceled off and sold by Deering’s nieces, who inherited the estate, but staggering maintenance costs and hurricane damage led them to sell (below market value) the estate to Miami-Dade county in the 1950s. Since then, the property has been restored, renamed Vizcaya Museum & Gardens, and designated National Historic Landmark status.

Vizcaya is a wondrous mix of cultures: Italian Renaissance revival gardens, European and American furnishings, Greek and Greco-Roman sculptures in the lavish gardens, and even Asian influences dot the property.

Ten acres of stunning gardens are the highlight of a visit here. Resembling the formal gardens of Versailles, you’ll find  mix of low, trimmed shrubs, thick labyrinth -like columns, and classical statues mixed with Miami’s native tropical vegetation such as palms, orchids, and local trees. Somehow, it all works together to create a uniquely Miami flair. Many rare varieties of flora can be found here, such as vibrant Vandas and Cymbidiums. Guests can also admire a massive garden fountain that was originally imported from Sutri, Italy.

Vizcaya is a popular destination for weddings, quinciñeras, and other special occasions due to its picturesque location on Biscayne Bay. Over the years, the estate and surrounding gardens have also been a backdrop in famous movies, and used for important ceremonies and events. In 1987, President Ronald Reagan hosted Pope John Paul II here. And in 1994, President Bill Clinton hosted the First Summit of the Americas at the estate, where world leaders met to discuss trade benefits.

Tickets are $18 for adults, $12 for seniors, $10 for students, and $6 for children ages 6–12. Children ages five and under are admitted free, and tickets include admission to the main house and surrounding grounds. Members of the National Trust for Historic Preservation receive a $2 discount on admission.

Vizcaya Museum & Gardens is located at 3251 South Miami Avenue, and is easily accessible by car, bike or public transit. The museum website has detailed directions from all arrival points, as well as information about local transport such as the city’s bike sharing program, Citi Bike.